M.A.S.K. (Mobile Armored Strike Kommand) is a secret counter-terrorism unit focused on combatting the criminal organization V.E.N.O.M. (Vicious Evil Network of Mayhem). It is led and financed by Matt Trakker, and has ties to the Peaceful Nations Alliance.

Recently, Hasbro has inserted elements of the M.A.S.K. storyline into its G.I. Joe Team. Matt Trakker has taken a position with them as an "Advanced Vehicle Specialist".

Matt Trakker, his brother Andy, and Miles Mayhem worked together on a secret project - creating transforming vehicles, and helmets, or "masks" with a wide array of useful capabilities. When the project was near completion, Mayhem betrayed the Trakker brothers, stealing half the prototypes and destroying their research facility. Andy Trakker was killed in the process, and Matt created M.A.S.K. to combat the misuse of the technology he helped create.

This origin story is derived from the comic that was packaged with the first wave of M.A.S.K. toys. It differs from the continuity of Season 1 of the animated series significantly, in that Mayhem and his V.E.N.O.M. agents do not know the identities of Matt Trakker or any of the M.A.S.K. team on the animated series. Entire episodes revolve around this plot point (e.g. "Eyes of the Skull").

By Season 2, however, both M.A.S.K. and V.E.N.O.M. had abandoned any attempts at anonymity, and, with few exceptions (e.g. "Demolition Duel to the Death"), everyone knew each other's allegiances. Additionally, elements of the origin story above are briefly alluded to ("Cliff Hanger"), fitting it into standard continuity.

M.A.S.K. has its headquarters at a gas station in Boulder Hill. Boulder Hill Gas works as a functional gas station, complete with gas pumps and a repair garage. Buddy Hawks, M.A.S.K. agent in charge of upkeep on the fleet of transforming vehicles, also maintains the gas station's cover as a working facility. If under attack, the gas station has offensive and defensive transformation abilities, including freeze cannons and armor plating.

Inside, M.A.S.K.'s headquarters is far from ordinary; M.A.S.K.'s vehicles are stored inside, as well as the energizing device that powers the team's masks. Matt Trakker has a subterranean transportation system that shuttles him between his mansion and M.A.S.K. headquarters. All this is supplemented by an incredibly powerful computer.

Matt Trakker has maintained a longstanding relationship with the P.N.A. and their liaison with M.A.S.K., Duane Kennedy. As an international peacekeeping organization, the P.N.A. frequently contacts Trakker with useful intelligence, usually involving V.E.N.O.M.'s activities.

In Season 2 of the animated series and Series 3 of the toys, M.A.S.K. and V.E.N.O.M. had taken their battles to the race track, either battling each other for the checkered flag or using the race as a diversion toward another goal. M.A.S.K. would often engage in these races at the behest of the P.N.A.

Whenever a mission involving V.E.N.O.M. is taken, Matt consults the computer to select the best agents suited for the mission. When the other team members are contacted, their M.A.S.K. watch gives a bleep and they spring into action. 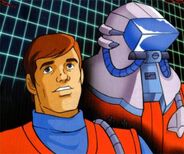 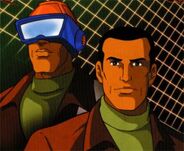 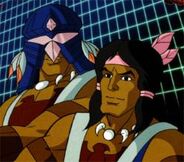 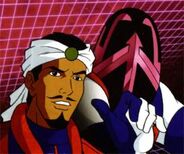 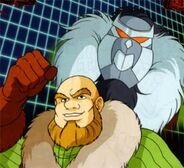 Boris Bushkin
Add a photo to this gallery

Note: while Scott Trakker is present on many missions and even occasionally assists the team toward their goals, he is not considered a member of M.A.S.K.

Retrieved from "https://mask.fandom.com/wiki/M.A.S.K._(organization)?oldid=6526"
Community content is available under CC-BY-SA unless otherwise noted.