Start a Wiki
Scott Trakker is Matt Trakker's only child who always want to help M.A.S.K. in missions although his behavior puts him into trouble. He's constantly in the company of T-Bob.

Although not an official member of M.A.S.K, Scott is a Mechanical and Computer Whiz, often replied by T-Bob (in the animated series, it is said that Scott built T-Bob all by himself) and demonstrated in some occasions when he and T-Bob find clues of V.E.N.O.M activities even against his father wishes for safety. If Scott was at least a teenager, he would probably be considered a M.A.S.K agent in training, but has been considered a honorary M.A.S.K agent, often stated by Bruce Sato and Gloria Baker for whom Scott developed a good friendship, even seeing them along with the other M.A.S.K agents as a big family.

At the end of every episode in Season 1, Scott and T-Bob with some of the M.A.S.K agents on occasion, taught safety lessons to viewers like: never play with matches, always use a phone post for emergencies on the road, never call for false alarms or always put on the helmet when you ride a motorcycle or a bike, etc.

For unknown reasons, Scott and T-Bob were absent in the Season 2 Racing Series.

Impulsive, curious. Scott has a habit og disobeying his father's orders to stay out of missions, often coming up with a creative reason to do what he was explicitly told not to do. However, even if he follows his father's orders, he has a tendency to end up in trouble anyway. 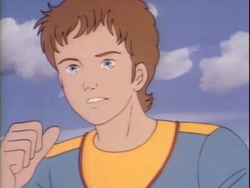 Scott Trakker
Add a photo to this gallery

Behind the Scenes Edit

Retrieved from "https://mask.fandom.com/wiki/Scott_Trakker?oldid=9809"
Community content is available under CC-BY-SA unless otherwise noted.