Shark is one of M.A.S.K. vehicles often driven by Gloria Baker (NOTE: Altought planned by Kenner, Shark was never released as an action figure).

It transforms from a white Porsche 928 Sports Car to a white attack submarine. 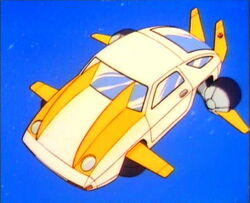 Shark
Add a photo to this gallery
Retrieved from "https://mask.fandom.com/wiki/Shark?oldid=9931"
Community content is available under CC-BY-SA unless otherwise noted.