The Battle For Baja
(Season 2, Episode 9)

Mark Halloran
Sly Rax is an agent of V.E.N.O.M..

Sly Rax is often depicted as rather lazy and falling asleep on the job. As soon as he gets the chance, he takes a nap, much to the annoyance of his V.E.N.O.M. teammates. He likes a fight with unfair odds in his favor or watching unfair fights. Rax often teases Cliff Dagger and is particularly abusive toward Nash Gorey due to the latter's constant brownnosing of Miles Mayhem. He regularly complains when things don't go as he wants them to, or he is assigned to a task he disapproves of.

Animals seem to dislike Rax as he often gets into trouble with them over the course of the series.

In some kind of manner, Rax has hidden ambitions to overthrow Mayhem as leader of V.E.N.O.M. or at least getting a better part in the schemes. 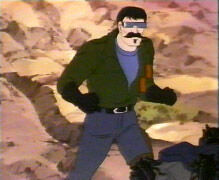 Sly Rax
Add a photo to this gallery

Behind the Scenes[edit | edit source]

Retrieved from "https://mask.fandom.com/wiki/Sly_Rax?oldid=9794"
Community content is available under CC-BY-SA unless otherwise noted.